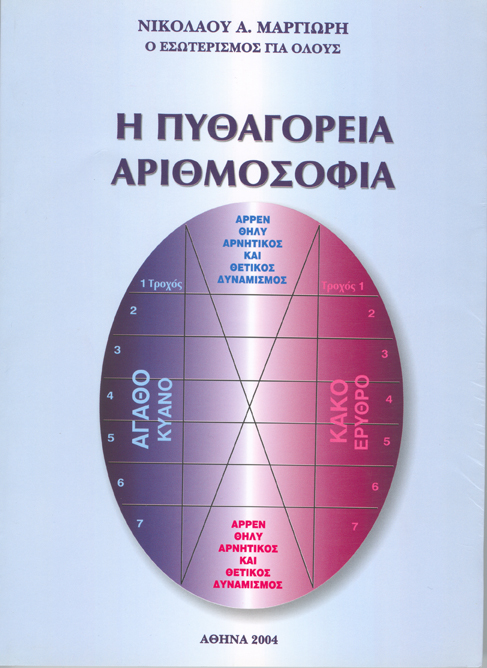 This book was published for the first tune in 1977 (three editions). The date of its edition gives us the following: 1+9+7=24=2+4=6. It is N. Margioris sixth book and the result of its edition year is also the number six. According Divine Pythagoras, the number six is the number of the Trinity, the refolding being the positive and negative connection of the couples. They are the plus and the minus for each triadic development, the yang and yin, they are the polarizations of the thesises and of the antithesises. The wisdom of the numbers with their substantial distinctions in even and odd,. represents the eternal Unit., in the drawings of the multiplicity. In its holy branchings, of the numbers wisdom, the saercher of the numbers finds the essence itself, that separated in the natural coating., in its external form only, gives the impression that it is divided in infinite amounts, while in the esoteric reality it remains integral and complete. With the assistance of the Pythagirean Arithmosophy, we are initiated in Theology, in the arithmetic scale, to the ascension on the spiritual area, tha the searched, true spiritual Theology develops.. By the mathematical reasonableness, the hyperintellectual ideology of conceiving the other -however invisible world - is perceptible. It teaches the Truth and it manages to introduce us in the substantial truth of the Numbers. Enjoy reading the Pythagorean thoughts for the Beyond.