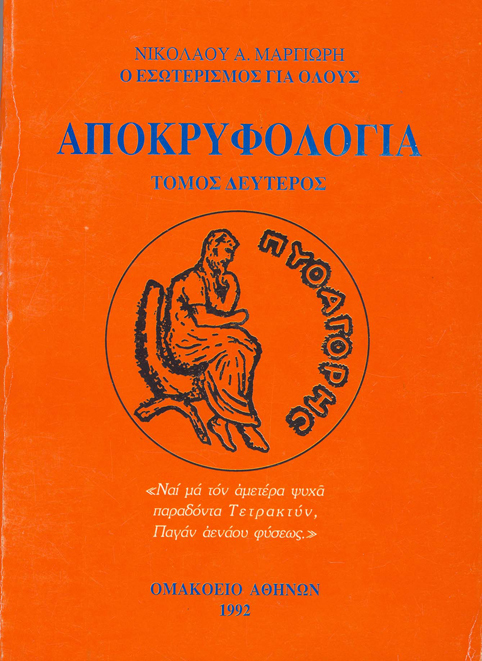 This is Master Nikolaos A. Margioris twenty-ninth work. It comprises three volumes and its second volume was published in 1992. This book analyzes the Occultism that examines the phenomena and the facts, the events and the Knowledge from another side, completely opposite to the one that the known, classical learning of our world examines. The Science that the Occultism treats is called Metaphysical Science and it is considered as the First Science because from this the first knowledge and the first orientating course of man started. But gradually - as it is described - this first knowledge and the first of the Sciences, the Metaphysical Philosophy,changed and declined and became miserable and was altered into an external orthologistic critique, leaving for ever the internal Knowledge that adorned the human quality and that secured in it the kingdom of this world, the physical and threedimensional one, which was bound to its end, to the intellectual cultivation of his known extrovert conscience. The orthologism by its intellectual function confined the Mind in the narrow limits of this world, as a willd beast is closed in its cage and it fades until it dies. This way - according to the Esoteric Philosophy - also man faded and fell sick and was corrupted and declined from the ascending way, since he had the wings of the Metaphysical ascension cut and he had his freedom stolen. The Occultism aims to bring the hope, the joy, the consolation and the true freedom bak to man, offering him the great scale that man can ascend easily, in order to be found in the Heavens, as Apostle Paul and many others, provided he gets prepared properky and becomes perfect, suitable and able to go up and to gather the fruit that are ready to be gathered by him... Finally, the Occultism is a double science or the dual cosideration of the world. of the visible world and of the invisible world, because it precedes much of our external science and it opens the way to future courses, that the exoteric science will dare to follow after many hundreds of years, while the esoteric science, the Occultism willl ascend even higher and will never stop searching in the Universes and the Esoteric worlds. As it becomes understood, the Occultism is immense and all what the Occuktusn knows, possesses and is intereseted in or it struggles to learn, will never be able to be comprised in one or in many books. In the second volume of the Occuktism, enough is revealed by the writer about what happens outside, in our threedimensional world, the etheric-physical one, or also outside our solar system, and outside the constellation of Argus, where we belong, and even outside the number seven, our local Galaxy. Particularly, what takes place in our threedimensional world, contributes to the presentation and to the preservation of our physical world, of life and of its various expressions. For more detail, see also the summaries of the other two volumes.